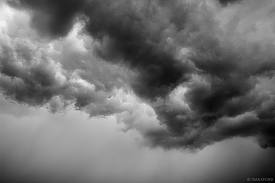 There’s a new tornado disaster movie in theaters called “Into the Storm.”  I’m not sure I want to go see it.  I’m still recovering from my own brief, but traumatizing tornado “encounter.”  No pun intended, but here’s how it went down…

I was out shopping on a Sunday afternoon last month when, for the second time this summer, my cell phone vibrated with this ominous message:

I hastily abandoned my cart with its contents and hurried to a neighboring store to collect Laurel and her two friends.  Outside in the parking lot, we scanned the horizon in search of a funnel cloud.  Seeing nothing but dark clouds and gray skies, I decided to make a run for home, reasoning that our full basement was a safer location than a one-story strip mall.

I was fairly confident I could make it there in time.

Within moments I was fairly confident I was wrong.

Warning sirens began blaring as our van rounded the back of the building.  The girls continued to monitor the clouds through the back seat windows.  The wind picked up.  Rain, mixed with hail, started to pelt.  My pounding heart echoed the staccato sound.

Soon we were engulfed in Gray.  For all I knew we were driving straight into the tornado.  And believe me when I say I’m no storm chaser.

At this point I instructed Laurel to call home to see if we could get some idea of where the funnel cloud had been spotted and which direction it was moving.  Emily answered and informed us that “it” was “by the church.”  “We” were several blocks directly east of the church.

This was beginning to get real.

My heart now kept time with the windshield wipers set to their highest speed.  I pressed harder on the accelerator, my leg trembling involuntarily as we sped north towards the house.  At times visibility became so poor I feared I would drive right off the road.  Seeing no other cars around, it seemed that everyone had gotten the memo about the tornado’s location but me.

I began to pray.  Nonstop.  Out loud.  I’m not sure if my prayers were a welcome comfort to my three wide-eyed passengers, or an unsettling sign that a meeting with our Maker was imminent.  (I’m guessing the latter.)

Seconds felt like minutes felt like hours.  I just kept driving (read: speeding).  And praying (read: crying out to my Maker).

We finally skidded around the corner onto the dirt road that leads up the steep hill to our home.  I scaled that hill in record time, fishtailing as I floored it down (read: up) the homestretch.  We lurched to a stop in our driveway, flung open the car doors and bolted through the heavy rain into the house.  We were breathless and drenched.

But we were safe.

We later learned that a tornado did touch down east of town not long after our crazy storm chase.  Emily had witnessed some scary looking cloud rotation in the church parking lot.  It was all part of the same strong storm system that cut diagonally across the city that afternoon.  But as far as we know there never was an actual funnel cloud bearing down on us, despite how frighteningly real it felt at the time.

After the fact, a friend jokingly remarked that those moments of sheer terror were a great time to make sure one was “good with God.”

You see, that’s the thing.  A tornado could have swept us up and into eternity that afternoon.  All of our days are numbered.  As Christian author and teacher Beth Moore once said:

“You gotta get home somehow.” *

Be it via tornado or illness or accident.  One day we will depart from this place we now call home.

It is vital to know that we are “good with God.”

I am.  I don’t base my confidence upon my own performance, but upon the perfection of the One I call Savior.  I love how Tullian Tchividjian put this in his excellent book One Way Love:

In other words, the older I get, the more smitten I become by the fact that God’s love for me, His approval and commitment to me, does not ride on my transformation but on Jesus’ substitution.  Jesus is infallibly devoted to us in spite of our inconsistent devotion to him.  The Gospel is not a command to hang on to Jesus.  It’s a promise that no matter how weak your faith and how unsuccessful your efforts may be, God is always holding on to you.”

If you have placed your trust in Jesus, then as far as He’s concerned, you’re good with Him.  Not because you are good or even just good enough.  But because HE was!

Storms will come.  They are unpredictable, unavoidable, and inevitable.

In those moments of fear and uncertainty, you can be completely sure of this:

He is with you.

He will hold on to you.

He will deliver you safely Home.

*From her teaching on Daniel 3.