This was the statement we were asked to complete as part of a group sharing activity at a recent MOPS meeting. (In case you’re not familiar with MOPS, it stands for “Mothers of Preschoolers. No, I am NOT a MOP. I guess I’m a MOT: “Mother of Teenager.” But I do serve this local MOPS group as a “Mentor Mom.”)

Ok. Back to the fill-in-the-blank. Because my mind went blank. I couldn’t think of anyone. So I opted for the standard Sunday School answer:

And while I DO desire to be more like Jesus, after the events of this past week I now have a new name I would fill in that blank:

Have you heard of her?

She is a modern-day “Esther.”

Naghmeh’s husband, Saeed, a pastor, has been wrongfully imprisoned in his native country of Iran for his Christian faith. Naghmeh has advocated tirelessly over the past two and a half years for his release, boldly approaching visiting diplomats, writing letters, giving television interviews, and speaking publicly about her husband’s plight. This month she organized three weeks of focused prayer and fasting, calling on fellow believers to join her in believing God for a breakthrough in Saeed’s situation.

When she heard that President Obama would be unexpectedly visiting her hometown of Boise, Idaho on January 21, she believed it was no coincidence, but a direct answer to those many prayers. So Naghmeh sent the president a respectful, impassioned letter requesting a meeting. She called on her people to pray that God would make the improbable, possible. Like Esther before she approached the king, Naghmeh fasted and prayed for three days. The day before the president’s scheduled visit, she received word that he had indeed agreed to meet with her and her two young children!

She posted this on her Facebook page last night:

I got to meet with President Obama today! The kids and I were in a small office room with him and he was gracious with his time (we met for over 10 minutes). I told him that I had refrained from food for 3 days and prayed and fasted and God had ordained this meeting. He shook his head and smiled. I told him that the kids and I prayed for him and loved him (that as Christians that is what we are to do). He said he needed prayer. He said that getting Saeed out is a top priority and he is working very hard to get Saeed home back to our family. Jacob then asked him “Mr. President, can you please bring my daddy home for my birthday?” President Obama asked Jacob when his birthday was and Jacob said March 17…President Obama said “I am going to try very hard to make that happen, Jacob. I am going to try very hard…” Praise God!

What an amazing story!

More fierce in my love, more persistent in my prayers, more gutsy in my faith.

Unlike Esther, the end of Naghmeh’s story is still being written. We don’t yet know how it will end. (Whatever the outcome, we know it will be good. Because GOD is good.) But I’m thankful that, in the meantime, God is using her faith and boldness to challenge and inspire us, just like Esther, “for such a time as this.” (Esther 4:14b, NIV) 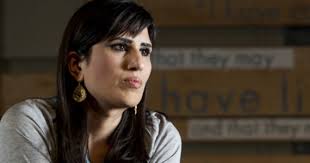