Seventy years are given to us! Some even live to eighty. But even the best years are filled with pain and trouble; soon they disappear, and we fly away. (Psalm 90:10, NLT) 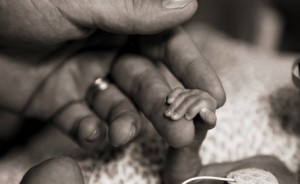 She made her entrance early into this world, weighing all of 2 pounds, 12 ounces.

But this was 1936. There were no NICUs, no incubators, no supplemental oxygen.

There were only prayers. And the will to survive.

Her hand was the size of her father’s thumb nail, and her entire body fit in the palm of his hand. They brought her home from the hospital in a shoe box. There were no car seats in 1936, either.

But the hand of God was upon her. She survived.

But she was a fighter. Strong-willed, like her dad.

She grew stronger, and then she grew up. Graduated from high school and business school. Got married. Had three kids.

She loved variety and change. The life of a military wife suited her well. Except for that one dark year when her husband was far away, in harm’s way.  But her Creator reached through the darkness, took her by the hand, and called her by name. She began to call Him, “Savior.”

Her kids grew up, and had kids of their own. She enjoyed traveling, especially if it took her near the coast, her favorite place to be. And those early prayers for her survival were now paid forward, as she became a faithful prayer warrior, interceding for others.

But always, there was that pesky shortness of breath. She accepted it as normal. She had just learned to live with it.

When she was in her early seventies, doctors discovered a hole in her heart. Congenital. From birth.

The hole was successfully patched in a procedure that was developed for newborns with the same defect. The doctor remarked that he had never performed the procedure on an adult before, much less a woman in her seventies!

But that’s my mom. She’s tough. A survivor.

Tomorrow that premature baby with a hole in her heart will turn 80.

Her life is a miracle. She is special–to God, her family, and all who know her.

Of course, the aging process can present its own challenges. As my dear paternal grandmother used to say, “Old age isn’t for sissies.” (She lived to be 98.)

But GOD never ages or changes. The One who brought her through eight decades of life will continue to be faithful to her–and to us.

What a precious promise, spoken from the tender heart of a good Father. He who created us will carry us, every single day of our lives. “From life’s first cry, to final breath…”* He will remain. He will sustain.

Your life IS a miracle life, nurtured and sustained by the gracious Giver of Life.

You really shouldn’t be here, you know.

But we’re so very thankful to God that you are.

* Lyrics from “In Christ Alone,” by Stuart Townend.

As I perched on the edge of the bed to slip on my socks this morning, I happened to glance over at the alarm clock on my husband’s nightstand.

There it was again.

It seems lately I notice this time, all the time.

In case you’ve never noticed, it’s the only time of the day that all four numbers on the clock are the same.

Some folks think this means it’s time to make a wish. Various authors claim that seeing 11:11 on a clock is an auspicious sign. Others believe that 11:11 indicates a spirit presence.*

Now I don’t know about all that.

But I do know that for me, those single digits have become a prompt. Not to make a wish, but to quote a verse. You see, I started a little “experiment” after teaching on this Bible verse last summer:

She considered Him faithful who had promised.
(Hebrews 11:11b, NAS)

Hebrews 11 has been called “The Hall of Faith.” The “she” referred to here is Sarah, the patriarch Abraham’s wife. Sarah made the cut when, despite their advanced age, she believed that God would bless her and Abraham with a child. Just because He said so.

I doubt my name would be nominated for any “People of Great Faith” category. I’m more of the “Oh Ye of Little Faith” variety. But I want to learn from Sarah’s example. So whenever I happen to spot those four numbers, standing like sentinels on the microwave clock or my IPhone screen, I now stop and repeat Hebrews 11:11.

I pause to think, ponder, meditate. Regardless of how I’m feeling at that particular moment in time. What do I consider?

Not me, not my problems. HIM. This gets my eyes of off myself and my feeble faith and onto the One who is…

By definition, this means He is “worthy of trust, can be relied on.”** My faith is not in my faithfulness, but in “the faithfulness of a promising God.” (John Gill)

Focusing on God and His promises is the key to developing faith. We are fickle, but God never changes (Hebrews 13:8). He cannot lie, so if He has promised something, it is as good as done! (2 Corinthians 1:20)

So what promises has God made? They are so numerous that counting promises in Scripture is a little bit like counting stars. (One person’s count exceeded 8000 promises!)

Psalm 138:8a is an example of a promise I have been claiming lately, as I stare down an intimidating upcoming wedding checklist:

The Lord will accomplish what concerns me. (NAS)

I take a moment to recall this promise and make it a simple prayer:

Lord, You ARE Faithful. You WILL accomplish ALL of the things that concern me. Thank you! Amen.

What began as a little experiment has now become a faith-fortifying habit!

So how about you? Want to try the 11:11 Experiment? It’s easy! Just memorize Hebrews 11:11. Or copy it on a sticky note and put it by a clock. Find a promise or two in the Bible that apply to your current situation. Then watch and wait.

When those four single digits pop up, stop. Take that single moment out of your day to pause and consider the promises of a Faithful God.

It will do you–and your faith–a whole lot of good.