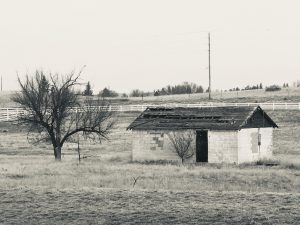 Not far from my home, in the center of an open field, sits a dilapidated shack. The roof is caving in. The doors have fallen off. Each passing prairie storm beats it down a little more.

I drive by it often. It always reminds me of the best-selling book “The Shack” and its gripping story of a bereaved father. The “shack” is both literal: the scene of his beloved young daughter’s murder; and figurative: the metaphor of a wounded human soul. God meets him in that place of devastation, then leads him on a soul-searching journey through the heartache to the healing.

Lately, I’ve felt like I’ve been in the shack with God. My job as a Client Advocate at our local pregnancy center has been tough this past year. The cumulative effects of stressors in my personal life, changes at the center, and clients in crisis eventually took their toll. My roof began to leak and my doors became unhinged. Each pounding storm beat me down a bit more, until I found myself broken down.

“I’m tired,” I heard myself say on more than one occasion on the job. I was getting plenty of sleep. This was a different kind of weary. A bone-weariness.*

There’s a name for this condition: Compassion Fatigue. I’m familiar with this term. I even taught our new staff about it. But I missed its warning signs in my own life.

Compassion Fatigue is a threat to first responders, medical personnel and caregivers alike. Anyone in close contact with suffering is vulnerable. Even cold-hearted attorneys can fall victim to it! (Sorry, Chris.)

The point is, the Helpers are now in need of Help.

“Self care = Client care,” I taught our trainees. It’s not selfish to take care of one’s self. “Put your oxygen mask on first,” flight attendants instruct their passengers. Then you can assist others.

Because what aid can we render if our own roofs are sagging and in need of repair? Not much. How can we nurture others if our own cells are depleted and oxygen-deprived? Not well.

I now have a new mantra. I prefer this one to “self care.”

The shack is a symbol of our soul. If we’re not careful, the stresses and storms of life can take a toll on our soul. Weighed down, beaten down, we can no longer echo the hymn writer’s refrain: “It is well with my soul.”

But into the ruins, the Triune God comes. He pulls us out of the rubble, soothes our damaged emotions and bandages our wounds. He helps us confront our fears and confess our failures. He teaches us valuable lessons.

It’s not always pleasant, this soul-revealing, soul-healing journey. But it is necessary. And it is good.

He is a Good Shepherd.

He is restoring my soul.

He will restore yours too.

He makes me lie down in green pastures; He leads me beside quiet waters. He restores my soul… Psalm 23:2-3a, NASB

*I recently learned that “bones” in the Bible are symbols of our inner being. Cool, huh? (Source: The Passion Translation note on Psalm 31:10.)

Note:  I hope to share more of my story of restoration in future posts. So stay tuned… 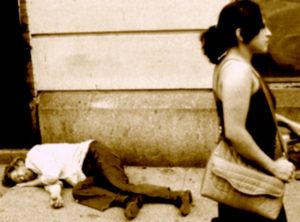 Do you ever desire a “do-over?” Or wish you could just push “rewind” and record a new response over one you regret?

I had one of those moments this past weekend.

It was halftime of the girls’ high school basketball game. The varsity cheerleaders were in position, ready to debut their coed routine. I was perched near center court, second row. Phone raised, thumb poised. I pressed the little red circle to start my video as the music began.

The team wowed the crowd with their flips, libs and pyramids. They nailed their jumps and cheers. Then, about halfway through the routine, one of the cheerleaders limped over to the sidelines. She sat down right in front of me, holding her knee, in obvious pain.

Another cheer mom, seated a few rows further up in the bleachers, finally ran down to the floor to assist her.

The routine ended, and the coaches and some of the other cheerleaders rushed to the shaken girl’s side. They carried her off the court so the athletic trainer could evaluate her.

Guilt began to swell up within me like the injured cheerleader’s knee.

Why did I keep videoing? Why didn’t I stop and help her? I was right there! She was right in front of me!

I was not “The Good Samaritan.” Instead, I was the one who passed her by.

As I reflected on this the following day, I identified three things that kept me in my seat:

I wondered if the ones who passed by the wounded man in the biblical story of “The Good Samaritan” struggled similarly. It’s a familiar parable, but worth revisiting…

Jesus replied with a story: “A Jewish man was traveling from Jerusalem down to Jericho, and he was attacked by bandits. They stripped him of his clothes, beat him up, and left him half dead beside the road. “By chance a priest came along. But when he saw the man lying there, he crossed to the other side of the road and passed him by. A Temple assistant walked over and looked at him lying there, but he also passed by on the other side. (Luke 10:30-32)*

Perhaps their tight schedules wouldn’t allow for a time-consuming detour. Maybe they also cared too much about appearances. They could have minimized what they had to offer, or rationalized that it was someone else’s responsibility.

“Then a despised Samaritan came along, and when he saw the man, he felt compassion for him. Going over to him, the Samaritan soothed his wounds with olive oil and wine and bandaged them. Then he put the man on his own donkey and took him to an inn, where he took care of him. The next day he handed the innkeeper two silver coins, telling him, ‘Take care of this man. If his bill runs higher than this, I’ll pay you the next time I’m here.’ (Luke 10:33-35)

The difference? The Samaritan not only saw the man, but he felt compassion for him. True compassion will lead to action. He did what he could. And it was enough.

So I’m asking God for a “do-over.” To be ready the next time I encounter a need. To feel genuine compassion. To let go of my own agendas, my preoccupation with appearances, and my fears of inadequacy. To offer what I have. To do what I can.

“Now which of these three would you say was a neighbor to the man who was attacked by bandits?” Jesus asked. The man replied, “The one who showed him mercy.” Then Jesus said, “Yes, now go and do the same.” (Luke 10:36-37)

Jesus didn’t ask us to help everyone.

But with His help, we can each help someone!

(P.S. I’m currently kind of obsessed with this song. Sharing, because it seems to fit with this post. And because I’m obsessed.)

*Scriptures are from The New Living Translation.