And I just can’t resist the urge to say, “TREES don’t live that long!”

Don’t worry, he won’t be offended. We’ve said this to each other for many years. In fact, when he turned 60, I gave him a coffee mug with this sentiment and a cross section of a tree with his name on it. He still has it.

My dad is known for his great sense of humor. My sister once dated a college basketball player who unfortunately spent more time on the sidelines than on the court. A former collegiate “cager” himself, Dad just HAD to take a good-natured jab at her bench-sitting boyfriend. So he doctored an 8×10″ team photo of the poor guy, taping some broken toothpicks to his posterior. Splinters. From the bench.

His quick wit still keeps us in stitches. Two weeks ago our family gathered to celebrate Rachel’s college graduation. At lunch after church, he had us all laughing so hard that the entire restaurant turned around at one point to see what the commotion was about!

He stays active, and is an excellent golfer. He was an accomplished Air Force navigator during the Cold War years, and flew dangerous missions during a year-long tour in Vietnam. He always worked hard to provide for our family. And his stealth and generosity in picking up the tab at restaurants is legendary.

But what I admire most about him is his faith. He came to it late in life. Strong athletes and proud military men aren’t the first to admit their need for a Savior. I believe his finest moment occurred one night at the close of a Christian concert he attended with my mom. He humbled himself, got up out of his seat and went forward, with tears on his face, to accept Christ.

Tall trees don’t grow overnight. But in time that seedling began to sink its roots down deep into the Word of God. It soaked in the teaching of godly men, eventually offering its own shade in which other men could grow and learn biblical truth.

When I was going through a spiritually challenging season a few years ago, he got on the phone and shared a devotional passage that he thought might encourage me. It did. I found strength and shelter under the branches of that spreading tree.

So, Dad, on your 80th birthday, thank you. For being that sturdy tree for our family. For your service, generosity, and humor. But most of all, thank you for your faith in God and devotion to His Word.

We are so blessed that this tree has lived that long. 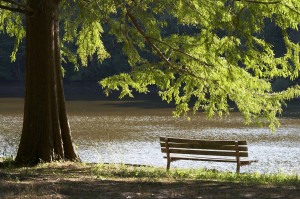 How blessed is the man who does not walk in the counsel of the wicked,
Nor stand in the path of sinners,
Nor sit in the seat of scoffers!
But his delight is in the law of the Lord,
And in His law he meditates day and night.
He will be like a tree firmly planted by streams of water,
Which yields its fruit in its season
And its leaf does not wither;
And in whatever he does, he prospers.