They had me at “hum.” I mean, who could resist these whimsical winged wonders as they dipped and sipped at the hummingbird feeder on my parents’ desert patio? I was fascinated by their flight, mesmerized by their movements and captivated by their colors. They reminded me of miniature hovering helicopters as they swooped in for a quick bite to eat. My favorite was a male who was draped in neon purple. I christened him “Royal.” 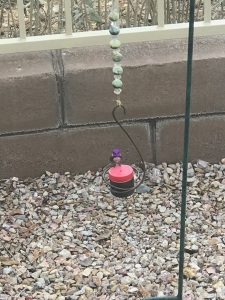 Apparently, I’m not the first. Hummingbirds have a long list of admirers dating back centuries. The Aztecs called them “reviving birds,” observing their amazing ability to slow their metabolism almost to death, only to “come back to life.” Christopher Columbus, upon arrival in the New World, remarked of “little birds, so different from ours, it is a marvel.” Captain John Smith dubbed them “humbirds,” and described them as “one of the wonders of the (country).”*

My newfound obsession with these agile little aviators inspired me to purchase my own feeder. Only I soon learned that attracting a hummingbird in Wyoming would not be easy. We live on the western edge of their habitat, and only three types of hummingbirds are found in this region.** In our 20+ years here I had only encountered ONE hummingbird.

Undaunted by these intimidating facts, I requested my mom’s sugar syrup recipe, and in faith, filled my cute mason jar feeder. I hung it on a shepherd’s hook outside the kitchen window and asked God to please send me a hummingbird. Then I watched, and waited.

Three weeks passed. As far as I could tell, our hummingbird diner had not served a single customer. Initially I changed the water every few days as instructed. But as the days turned into weeks, I was less diligent. I began to lose faith. My husband expressed doubt that there were even hummers to be had.

The last week of May, we celebrated our youngest daughter’s high school graduation with family and friends. In all the commotion, I completely neglected the hummingbird feeder. The day after graduation, as I sipped my morning tea at the kitchen table, I noticed the stale water in the untouched feeder. Sigh. I felt discouraged and defeated in my hummingbird quest. Maybe Chris was right after all.

Then unexpectedly, fresh faith bubbled up in my heart, like the sticky syrup when I’d refill the feeder. I recalled the many sweet gifts God had so graciously given me over the years, and how I’d come to know Him as a good Father who loves to delight His children. I’d walked with Him long enough to know He could certainly do it again.

So I mustered a mustard seed of faith and prayed:

Lord, I believe You will send me a hummingbird. Just because I asked. And because that’s just the way You are.

An hour or so later, my parents arrived at the house. When they entered the kitchen, my mom excitedly exclaimed, “Look! A hummingbird!” Sure enough, there she was–a very ordinary-looking, brown, female hummingbird sticking her pointed beak into the metallic red flowers around the base of the feeder! God had answered my prayer! We all gathered around, enjoying the shared moment and celebrating her much-anticipated arrival.

Everyone, that is, except Chris. He was at work that morning. Later, he listened skeptically as we recounted the tale of our tiny backyard visitor. Unconvinced, he wondered if we had instead witnessed a hummingbird moth, commonly mistaken for a hummingbird. We googled images to compare. I was pretty sure we had seen a humming bird. But “Doubting Chris” was putting doubts in my mind.

A week later, Chris and I were sharing a quiet meal at the kitchen table. He happened to glance up from his plate to spy the female hummingbird hovering at the feeder! She had returned! This was no imposter, and Chris was no longer an agnostic! A few days later, he even spotted the male, with his iridescent emerald head. I am now happily married to a Believer!

The advent of these tiny birds brought some not-so-tiny take-aways:

So what will YOU ask your Heavenly Father for today? Step out in faith. He loves you. Let Him surprise and delight you as only HE can!

Now Thomas (also known as Didymus), one of the Twelve, was not with the disciples when Jesus came. So the other disciples told him, “We have seen the Lord!” But he said to them, “Unless I see the nail marks in his hands and put my finger where the nails were, and put my hand into his side, I will not believe.” A week later his disciples were in the house again, and Thomas was with them. Though the doors were locked, Jesus came and stood among them and said, “Peace be with you!” Then he said to Thomas, “Put your finger here; see my hands. Reach out your hand and put it into my side. Stop doubting and believe.” (John 20:24-29, NIV)

Note: See my blog post from April 2016 for more biblical perspectives on Prayer!

*From “How to Name a Hummingbird” by Kim Johnson. 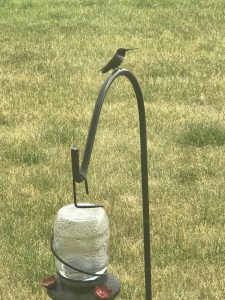 The twelve men had been with Jesus long enough to know that He enjoyed a unique relationship with God. On more than one occasion they discovered him missing, only to stumble upon him praying. Like someone on an extended journey, homesick, frequently compelled to call home.

They saw how He derived strength and serenity from those conversations. The intimacy He had with the Lord was intriguing. For months they had watched and now they wanted what He had.

One day, one of them finally had the courage to verbalize what they were all thinking.

They waited. Would He be willing to share His secrets?

Sensing their readiness for what He was about to reveal, the Rabbi began.

Had they heard that right? Did He really just say…Abba?

Their Scriptures referred to God as “Father,” but only rarely. Just 15 times, to be exact. No God-fearing Jew would have the chutzpah to approach the Most High God and address Him as “Abba.” It felt irreverent. But, at the same time, inviting.

It was, indeed, an invitation into the intimate fellowship of Father and Son. A new way of relating to Almighty God was opening up. The Teacher continued to instruct and prepare them for this coming change.

It took some getting used to, this idea of familiarity with Yahweh. His was a name so holy it could not be spoken out loud, and could only be written if the vowels were omitted. It seemed outrageous that the great “I AM” would now answer to the name “Abba.” He was a God to be kept at a safe distance.

What they didn’t understand at the time was that Jesus Himself was The Way to closeness with the Father. He was the means by which men could be brought near to God. He was the path to Heaven, which would be paved by His death, and opened by the Spirit upon His return to the Father.

Soon it would all make sense. Then they would begin to call Him Abba, Father.

He invites us to call Him Father, too.

Regardless of what kind of dad you had, whether he’s in heaven or still on earth, you can experience the love of a perfect Heavenly Father. Jesus makes this possible. He closed the gap between Holy God and unholy man. He brings us before His Father’s throne and introduces us as family. We are welcomed as sons and daughters.

When we pray, we say Abba, Father.

It’s Father’s Day. Why don’t you call home? Your Father is waiting to hear from you. 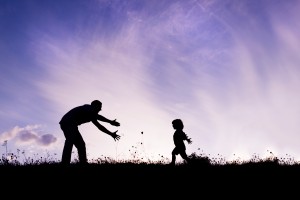 –Some of the thoughts I shared in this blog were inspired by a commentary on the Fatherhood of God by Robert H. Stein. Here is an excerpt: “The teaching of the Fatherhood of God takes a decided turn with Jesus, for “Father” was his favorite term for addressing God. It appears on his lips some sixty-five times in the Synoptic Gospels and over one hundred times in John. The uniqueness of Jesus’ teaching on this subject is evident for several reasons. For one, the rarity of this designation for God is striking. There is no evidence in pre-Christian Jewish literature that Jews addressed God as “Abba.” A second unique feature about Jesus’ use of Abba as a designation for God involves the intimacy of the term. Abba was a term little children used. This was not just a way Jesus taught his disciples to address God; it was the way.”