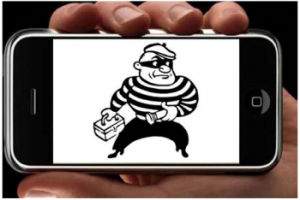 Emily’s iphone was stolen Monday night.  She thought it would be safe in her coat pocket in the break room at work.  She was wrong.

A few months ago at church she also thought her purse would be safe on the seat next to her during worship.  Wrong again.

Both of these incidents had relatively happy endings.  Her purse was discovered in the women’s bathroom, mostly intact.  Her iphone was recovered within a few hours, thanks to a diligent police officer and amazing modern technology.  (Thieves, beware of a handy little iphone app which signals a lost phone’s exact location!)

The loss of trust, however, is harder to regain.  A sense of personal well being and security is more difficult to recoup.  A thief steals more than mere personal belongings.

A few weeks ago my sister sent me a text message with this question:  What is your favorite Bible verse?  I’ve never really designated one particular verse as my all-time favorite.  But Jesus’ words in John 10:10 were the first thing to pop into my mind:

“The thief comes only to steal and kill and destroy; I came that they may have life, and have it abundantly.” (NAS)

It seemed like a strange response at the time.  Not the kind of verse you’d necessarily want stencilled over your fireplace or cross stitched in a frame.  References to theft, murder and destruction aren’t exactly family room friendly.

Yet aren’t these the very themes that have been playing out on television screens in family rooms all across the country lately?  One needn’t look far to find abundant evidence of this “thief’s” activity.  Satan’s fingerprints are all over recent events, from the tragic suicide of a well-known pastor’s son, to the drama and devastation on Boston’s bloodstained  sidewalks, to the massive fireball which left a Texas community reeling and mourning.

“The thief comes only to steal and kill and destroy…”

Should we be surprised?  It’s his job description, after all.  The NAS New Testament Greek Lexicon defines destroy as “to render useless.”  If he can’t murder his victims outright, he will attempt to rob them of joy, hope and purpose.  He seeks to paralyze, defeat, and make us ineffective.

Into this dark reality…Jesus came.  His assignment?  To bring LIFE.

He once claimed Isaiah 61 as His job description.*  Verses 3-5 contain phrases such as these:

This is why He came.  To unravel the work of the enemy.  To return what the thief has stolen.  To take tragedy and somehow fashion something beautiful out of it.  I don’t know how He does it.

It takes time.  Often a long time.  Maybe even a lifetime.

And that is why I’m holding on to Him, and to John 10:10, a little more tightly these days.