The Passover of the Jews was near, and Jesus went up to Jerusalem. And He found in the temple those who were selling oxen and sheep and doves, and the money changers seated at their tables. And He made a scourge of cords, and drove them all out of the temple, with the sheep and the oxen; and He poured out the coins of the money changers and overturned their tables; and to those who were selling the doves He said, “Take these things away; stop making My Father’s house a place of business.” His disciples remembered that it was written, “Zeal for Your house will consume me.” (John 2:13-17, NAS)

Jesus was at home in the temple, teaching, healing, worshiping. A Son, in His Father’s house, going about His Father’s business.

But on this day? It was time for a little housecleaning.

The outer court of the temple was more like a bustling marketplace than a peaceful sanctuary. Tables had been set up for the convenience of visitors who needed to exchange money or purchase a sacrificial animal before proceeding to the inner courts of the temple. Upon entering the courtyard, one’s senses would have been assaulted with the sights, sounds, and smells of this carnival-like atmosphere. Regular temple worshipers had probably become somewhat desensitized, accepting the scene as normal.

Not Jesus. He had had enough of this bizarre bazaar. Fashioning a whip, he drove the sellers and money changers out in a rare display of angry passion.

Zeal for His Father’s house, we’re later told by His disciples, had simply overcome Him.

That temple is long gone, reduced to Roman rubble in 70 A.D. But now there is a new temple. One erected in every heart where Jesus dwells.

Do you not know that you are a temple of God and that the Spirit of God dwells in you? (1 Corinthians 3:16, NAS)

And just like the days of old, “money changers” come and set up their tables in the temple courtyards of our hearts. Some have occupied space there for years. The Bible calls them “strongholds.”

The weapons we fight with are not the weapons of the world. On the contrary, they have divine power to demolish strongholds. We demolish arguments and every pretension that sets itself up against the knowledge of God, and we take captive every thought to make it obedient to Christ. (2 Corinthians 10:4-5, NIV)

A stronghold can take many forms. It could be a persistent sin, struggle, or addiction. It’s something that “sets itself up” in our lives to keep us from intimacy with God. It is anything that consistently robs us of what is rightfully ours.

Strongholds were never meant to be tolerated. Yet we grow accustomed to their presence and accepting of their chaos. We even start to “own” them, personalizing them…my anxiety, my insecurity, my anger. Strongholds are thieves masquerading as friends.

I allowed a long-standing stronghold of Fear to set up camp in my heart. It was a familiar presence, one I had learned to put up with and had begun to call my own. But according to 2 Corinthians 10:4, strongholds are meant to be demolished. Destroyed.

Thankfully, Jesus is on the scene. And He is still passionate about His Father’s house. He possesses the power to clear the temple courts with a whip and a word.

That word is our weapon.

For the word of God is alive and powerful. It is sharper than the sharpest two-edged sword… (Hebrews 4:12a, NLT)

His word is the gleaming sword that pierces, the swinging hammer that crushes, and the raging fire that can consume all of our strongholds.

Regarding “my” stronghold of fear, He placed this particular weapon from His word in my trembling hand:

His word IS alive. And amazing. I doubt it’s coincidence that the Greek word for “drives out” in 1 John 4:18 is the same root used in John 2:15, when Jesus “drove out” the money changers.

I decided that Fear had littered my temple ground long enough. Perfect Love swept in and swept it away.

Does this mean I’ll never battle with fears again? No. But when I do, I’ll take them captive, rather than the other way around. (See 2 Corinthians 10:5.)

What strongholds have staked a claim in your life? Are you tired of paying their exorbitant fees? Do you long for peace in the sacred spaces of your heart?

Jesus is here. He is ready to clean house, overturn some tables, and drive the money changers out.

Just say the word. Then take Him at His word.

He is zealous for you, lovely temple of His Holy Spirit. 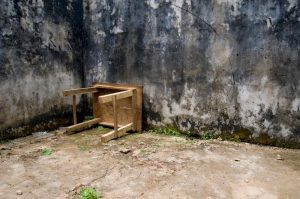