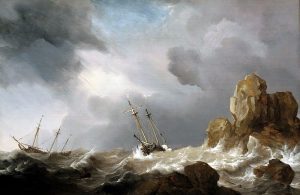 It’s been a stormy summer.

And I don’t just mean the weather, although we’ve had our share of those storms too. One early summer storm was so severe it spawned tornados and spewed hail the size of baseballs, leaving shattered windshields and shredded roofs in its wake! We’re still repairing the damage.

We’ve also endured medical storms. A late-night ER visit. MRIs. Shoulder surgery. Physical therapy. A root canal. We’ve weathered emotional storms–challenging situations both personally and professionally. (And did I mention the water well line leak that bubbled up in our backyard and required a backhoe to fix?)

None of these were more than tiny blips on the radar when the summer began. We charted our course, expecting smooth sailing. But storm clouds gathered and our plans scattered.

So what do you do when you find yourself tossed by waves in the middle of an unforeseen gale?

I know this from watching “Deadliest Catch.” If you’re not familiar with this reality TV show, it chronicles the dangerous work of crab fishermen on the Bering Sea. In a recent episode, the fleet was warned of an approaching hurricane. Most of the captains quickly sought shelter in the nearest harbor, where they anchored to safely ride out the storm.

During our recent storms, I took refuge in the word of God. One verse in particular helped to steady me:

We have this hope as an anchor for the soul, firm and secure. (Hebrews 6:19a, NIV)

An anchor’s function is pretty obvious. But for those of us non-nautical types, here’s a basic definition just in case:

“An anchor is a device, normally made of metal, used to connect a vessel to the bed of a body of water to prevent the craft from drifting due to wind or current. The word derives…from the Greek ankura.” (Wikipedia)

In Hebrews 6:19 the anchor is a metaphor “…for that which supports or keeps one steadfast in the time of trial or of doubt. It is an emblem of hope.” (Easton’s Bible Dictionary) W.E. Vine writes that “…what an anchor is to a vessel in its tossings, so the hope is to us in our times of trial, difficulty and stress.”

I was fascinated to learn that the most common early Christian symbol was, in fact, not the cross, or the fish, but the anchor. Inscriptions on first century believers’ tombs often depicted anchors along with messages of hope.* In Roman catacombs, the ancient hiding places for persecuted Christians, one symbol appeared more often than any other: the anchor.** Some scholars believe the anchor was a word play in the Greek, noting the similarity between ankura and en kurio, or “in the Lord.”*

I liked this summary from the Hebrews Commentary:

“This hope which the believing soul has in the Lord Jesus is an anchor of the soul which cannot be made to totter nor break down when put under stress and strain.”

This anchor holds. It will not slip or snap under pressure. It can support the heaviest weight and withstand the strongest current.

And indelibly etched on this trustworthy anchor is a name: Hope. An unshakeable hope. Firmly embedded in a secure salvation.

“The certain hope of our future salvation is an anchor to steady our souls while we wait on God in present storms.” (Stephen J. Cole)

We can hang on because Heaven is coming! On the other side of this storm called Life is a glorious future. One so amazing the Bible says we can’t begin to imagine it (1 Corinthians 2:9) and that our present sufferings are not worthy to be compared with it! (Romans 8:18)

But God not only promises a future salvation, but also a present help. He’s with us in the storms! We never face them alone.

No matter how turbulent the seas get, He won’t let go. No matter how fiercely the winds blow, He will hold onto us. We won’t drift into the rocks. We will not be destroyed.

Yes, it’s been a rough ride this summer. Wave after wave have rocked our little boat. But He’s sustained us through them all.

When the storms of life come, the wicked are whirled away, but the godly have a lasting foundation. (Proverbs 10:25, NLT)

This song has become an anthem for me in the storms. Let Hope be your anchor!

*From an article in Christianity Today.

The above painting is called “Ships in a Gale” by Dutch painter Willem van de Velde.