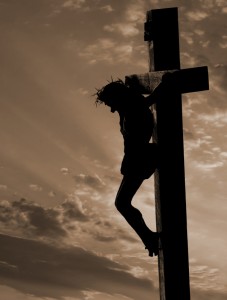 They deserted Him when He needed them the most. One betrayed Him with a kiss. Another denied three times that he even knew Him.

(And these were His friends.)

They arrested Him on trumped up charges. Mocked and mistreated Him. Sentenced Him to an excruciating death.

He prayed for them.

(And these were His enemies.)

I’m not that different from either one. I fail Him when I bow my head in slumber instead of prayer. I deny Him when I let fear of what others might think silence my voice. I mock Him when I pay mere lip service to His commands. I crucify Him all over again when I yield to the flesh instead of to the Spirit.

(And I claim to be His follower.)

Yet, He assures me that …where sin increased, grace abounded all the more. (Romans 5:20b, NASB)

“But God demonstrates his own love for us in this: While we were still sinners, Christ died for us.” (Romans 5:8, NLT)

How can it be,

That Thou, my God, shouldst die for me?

*Lyrics are from “And Can It Be, That I Should Gain?” by Charles Wesley, published in 1738.

5 thoughts on “What Kind of Love”