This past week I chaperoned my sixth “Desperation” youth conference in Colorado. Some may call me a glutton for punishment. But they’d be mistaken. I am a privileged witness.

It just never gets old, seeing this generation rise up to take their place, with selfless faith. I never tire of watching them stand to worship the Living God, arms high and hearts abandoned.

The image I have each year as I survey the crowded auditorium is that of a vast field of wheat, swaying in the sunlight to the gentle rhythm of the wind. It’s an incredible sight to see. 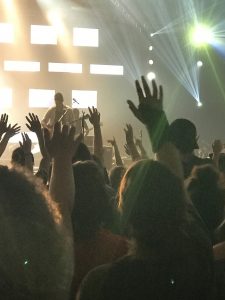 This year, one particular stalk stood out in the sea of wheat: an unassuming, slim, teen boy wearing a t-shirt the color of a Colorado sky. This dude pulsated to his own internal beat, blissfully out of sync with the others. He was worshiping the Lord with extraordinary passion, completely unconcerned with his surroundings. A modern-day David, dancing before the Lord with all his might.

I was captivated by this beautiful example of consumed worship. That is, until he unknowingly backed up into a couple of steps in the aisle and fell, disappearing from view. I held my breath as several bystanders rushed to his aid and helped him to a nearby seat several rows in front of me. He appeared to be injured by his unexpected fall. For a moment he seemed to be shaken.

And then I watched, astounded, as he lifted his hands in his seat and simply continued worshiping. He wasn’t about to let a little stumble trip him up. No pain would prevent his praise.

Once again he reminded me of David, the psalmist, who frequently poured out his heartache and troubles to the Lord, but refused to allow them to silence his praise. David would cry out to God in the anguish of his soul, and in the next breath praise Him for His goodness and faithfulness. Nothing would keep him from worshiping his God.

I want to be more like that. Less distracted by my difficulties. More consumed by the character of the One who is Ever Worthy of my praise. Even in, especially in, my pain.

So thank you, boy in the blue shirt. For not caring what your peers think about you. For being willing to throw yourself fully into worshiping your King. For not letting anything stop you from lifting your hands in praise to the Most High God.

Thank you for leading me in worship.

But as for me, I will hope continually, And will praise You yet more and more. (Psalm 71:14, NAS)

*This song really seems to capture the determination to praise God, even when it hurts.

As Jesus and his disciples were on their way, he came to a village where a woman named Martha opened her home to him.  She had a sister called Mary, who sat at the Lord’s feet listening to what he said.  But Martha was distracted by all the preparations that had to be made.  She came to him and asked, “Lord, don’t you care that my sister has left me to do the work by myself?  Tell her to help me!”

“Martha, Martha,” the Lord answered, “you are worried and upset about many things, but few things are needed—or indeed only one.  Mary has chosen what is better, and it will not be taken away from her.”  (Luke 10:38-42, NIV)

But despite my best intentions, each Christmas season inevitably finds me distracted with all my preparations, spending less and less time with Jesus.  This year has been no different.

A late Thanksgiving and an extra full social calendar this past month only made matters worse.  I’d snatch a few moments of prayer in the car as I drove from one activity to the other.  I’d quickly skim my devotional book before turning out the light at night.  But I had yet to slow down long enough to really worship the One whose name this season bears.

I had planned to skip church.  The Broncos were playing early.  The service would be identical on Christmas Eve, so I wouldn’t really “miss” anything, I reasoned.  But as I scrolled down my Facebook newsfeed around 10:15 this morning, still in my pajamas, I came across this post:

“The first day of winter – a good day to worship the Most High God!”

And then a few posts later, this: 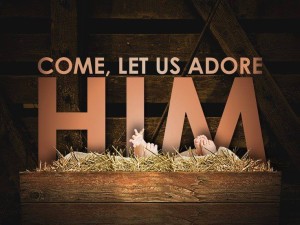 Suddenly I felt drawn, compelled to drop everything and go worship.  I hurriedly dressed for the 11am service  and headed out the door alone.  I didn’t care what the rest of the family, or the rest of the world, for that matter, was doing.

I would worship Him.

And I did.  Hand raised.  Eyes closed.  Unaware of those around me.

I sat at the feet of Jesus.  My ears listening to His words.  My heart connecting with His.

It was a good – no, the best – place to be.  It didn’t have to be in church.  Worship can happen anywhere, whenever our hearts are centered on Him.  Even in the midst of all of our preparations.

It’s never too late to have a “Mary” Christmas!