Beau marked his “Half Birthday” last week.  And, as if a switch had been flipped in his little doggy brain, he immediately began “marking” his territory.

I was reminded of all the reasons we wanted a female dog.

We in turn celebrated the milestone with a trip to the vet for a few “alterations.”  (Sorry, Beau.)  We’re hoping this will “fix” his little leg-lifting problem.

But I have to share Laurel’s response when we discovered her dog’s newfound compulsion to mark his territory.

Then she turned to me.  “This could be an illustration.”

“Of what?” I questioned.

She went on to describe how as Christians we often work so hard, trying to gain something that has already been given to us.

When we were adopted into the family of God, what was His became ours.

All praise to God, the Father of our Lord Jesus Christ, who has blessed us with every spiritual blessing in the heavenly realms because we are united with Christ. (Ephesians 1:3, NLT)

There is no longer any reason to feel insecure.  He has given us every spiritual blessing in Christ.  We have a place in His heart forever, and a full inheritance as sons.  We are marked with His seal of approval.

Stop strutting your stuff.  Cease striving to prove your worth.  Quit worrying about “making a mark” for God.  (That last one was for me.)

Just live in the joy and freedom of your Father’s house. 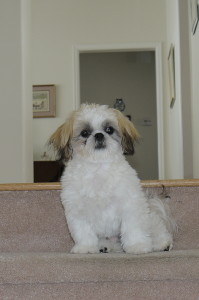 (Now let’s pray Beau also figures this out.  And soon.)

What’s in a name?

Apparently a great deal, according to God.  He’s been in the name change business from the beginning.

Here are just a couple (out of many) biblical examples:  Abram, which means “Exalted Father,” became Abraham, the “Father of a Multitude.”  Simon was introduced to Jesus and immediately given a new name:  Peter, the “Rock.”  To the Jewish people, one’s name was essentially one’s identity, one’s destiny.

A few years ago, while reading the book Captivating by John and Staci Eldredge, I was intrigued when I came across this verse:  “…you will be called by a new name that the mouth of the Lord will bestow.” (Isaiah 62:2b)  The authors encouraged their readers to pray and ask God how HE views them and by what name HE might call them.  I was a bit skeptical and somewhat hesitant, but I presented the question to the Lord anyway.

This is the name He impressed upon my heart:

But the more I pondered it, the more it seemed to fit.  I’ve always had a thing for sheep, probably because they are mentioned so often in the Bible.  (While staying on a Welsh sheep farm once, however, I discovered that the sound of bleating sheep right outside my window all night didn’t quite match up with the peaceful, pastoral image I had imagined!)  One of the passages that I’ve adopted as my life’s calling is found in John 21, where Jesus commissioned Peter to care for His flock, saying, “Feed my lambs…take care of my sheep…feed my sheep.”

I love God’s Word, and I am passionate about sharing its truths and principles with others.  Kind of like feeding sheep, in a spiritual sense.  When I’m around a group of young believers, I get all maternal and just want to gather them around and, well, care for them.  So I guess I do have a bit of a shepherd’s heart.

But what really boggles my mind is that rather than viewing us as mere servants or hired help, God calls us His sons and daughters.  “See what great love the Father has lavished on us, that we should be called children of God! And that is what we are!”  (1 John 3:1)  He not only brings us into the fold, but He adopts us and makes us HIS OWN.

When I first started this blog, I considered going by the name “The Shepherd’s Daughter.”  But it just sounded so…presumptuous.  And yet, outrageous as it is, we ARE sons and daughters of the Living King, the “Shepherd and Guardian of our souls.” (1 Peter 2:25)

So here I am.  “The Shepherd’s Daughter.”  I’m not the only one, for He has many.  But I am one.  And I am honored to represent my Father and serve in His fields. 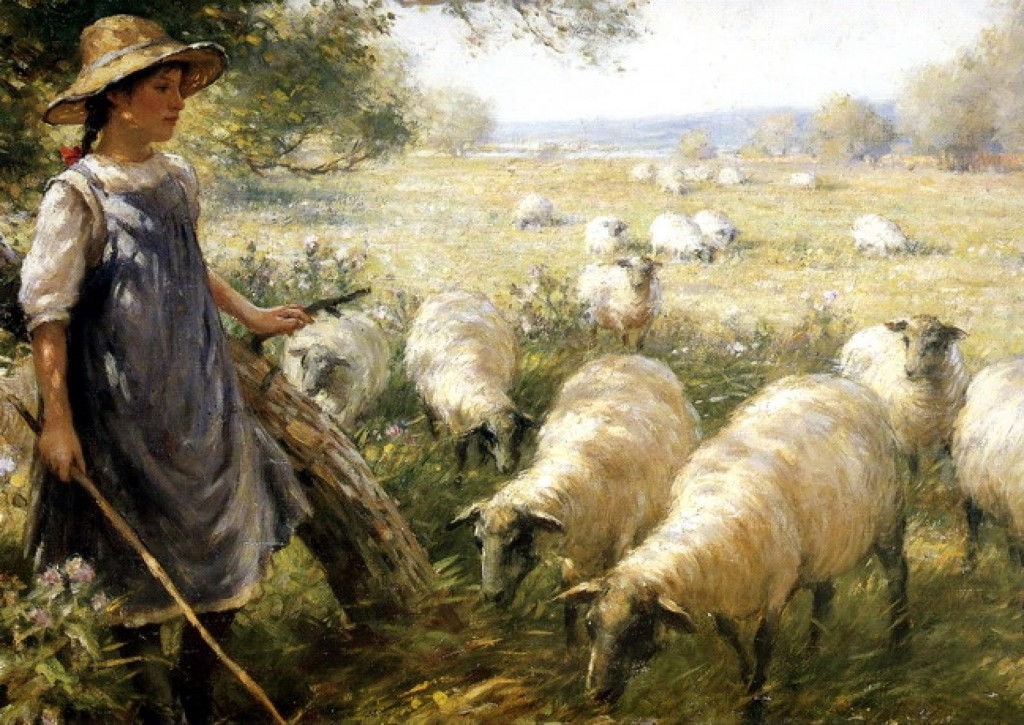 The above painting is by English artist William Kay Blacklock.  I fell in love with it well over a decade ago when we lived in England, and brought a print of it back to the States with me as a reminder of our years there.  It now hangs in our dining room above our piano.  It’s name?