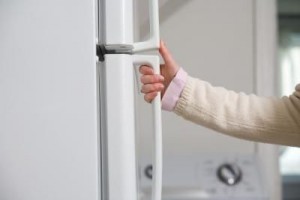 I have an aversion to throwing away uneaten food, even though the chances of it getting consumed in this household are slim.  I married a man who hates leftovers.  My kids aren’t much help either, unless it involves carry-out pizza.  But I come from a long line of leftover lovers, and old habits die hard.  So I faithfully carry on the proud family tradition of mummifying the contents of assorted little containers in Saran Wrap and sending them off on their journey to the back of the fridge to be forgotten.

A random peek inside my refrigerator revealed, among other delicacies:  a half-eaten, dried out deli chicken breast, a bowl of petrified onion dip, and a moldy ham.  Dee-lish.  Why do I keep this stuff around?  Probably because I have another aversion:  coming into contact with these unappetizing items which I once so carefully preserved.  I simply ignore them and hope they go away.

My state of denial will continue until my husband, disgusted with the crowded shelves, brings the trash can over to the open refrigerator and starts dumping.  We breathe a collective sigh of relief; the dishes are disinfected and returned to the cabinet to await new inhabitants.  It’s The Circle of Leftover Life.

There’s another way I store leftovers, however.  It happens when I’ve been hurt.  I tend to hang onto it, befriending it, rather than letting it go.  I wrap it in layers of self-righteousness, victimization, or justification and stick it in the fridge of unforgiveness, thinking it will be fine in there.  Or maybe it will just miraculously disappear and I won’t have to deal with it.

I’ve heard the refrigerator described as “the place where leftovers go to die.”  Only they don’t really die, do they?  They evolve into something worse.  Just as that bowl of bright orange carrots doesn’t retain its original color and taste, so “hurt” doesn’t remain as “hurt.”  It mutates.

The Bible gives us a glimpse of the changes that occur when we allow hurt to linger in our lives.  It is found in Ephesians 4:31:  “Let all bitterness and wrath and anger and clamor and slander be put away from you, along with all malice.” (NAS)  Some commentators suggest that this list is a progression, going from bad to worse.  Let’s place the slide of Ephesians 4:31 under a microscope and examine the organisms that are growing there.

I believe hurt is the breeding ground for bitterness, which the thesaurus also describes as “resentment.”  According to Webster’s, the word stems from an Old English word meaning “to bite.”  Bitterness bites, all right.  Hebrews 12:15 describes a “root of bitterness” which “springing up causes trouble.”  When we choose to nurture our hurt, we invite the bacteria of bitterness to multiply.

Wrath and anger are the next arrivals on the scene.  Wrath is translated passion in the New English Bible.  Anger is described as “more premeditated, while wrath is more spontaneous.” (Bob Deffinbaugh, emphasis mine)  Do you see the progression?  Which is considered greater—a crime of passion, or one that is premeditated?  Wrath and anger are dangerous molds that grow in a bitter spirit.

Clamor and slander develop in the Petri dish of our speech.  The dictionary defines clamor as “a loud continuous noise.”  My favorite definition is this:  “(Clamor is) the loud self-assertion of the angry man, who will make everyone hear his grievances.”*  (Did you catch that reference to anger?)  This is where we make sure everyone knows how greatly we have been wronged!  If unchecked, clamor will degrade into slander, which is “speech that demeans the other person” (Deffinbaugh) or is “injurious to another’s good name.”**  These words don’t merely attack the individual’s character and reputation, but, according to Hebrews 12:15, the people we vent to are now also being “defiled.”  This is part of the toxic and infectious nature of bitterness.

The final fungus we view through the lens is malice:  “resentment that has turned even more sour…ill-will to the degree that we wish to see them suffer…actively seeking to bring harm to another.” (Deffinbaugh)  Things can get really messy here.  Because we have been hurt, we want them to hurt too.  This leads many to seek retribution and revenge.

A few years ago I was deeply hurt by someone close to me.  I kept the offense tucked away in a corner of my mind, hoping it would fade with time, but it didn’t.  It was always there, ready to be recalled.  What I failed to notice during the months that followed was that it was morphing into something ugly and unrecognizable.

Instead of just hurt, I began to feel angry.  When the topic came up in conversation, I was all too willing to recount their sins, referring to them by name, with complete disregard for their reputation.   I secretly wanted them to suffer for their indiscretions, thinking they would only be getting what they deserved.  I assured myself that when they called and told me how sorry they were for hurting me, I would most certainly forgive them.  Only that call never came.  Meanwhile, the shelves of my heart were sagging under the weight of all my “leftovers.”

Thankfully, Ephesians 4:31 not only describes the contents of a cluttered heart, but it also provides the remedy:  Put Them Away.  This doesn’t mean stuffing them in a drawer somewhere.  The idea here is “to pick up and carry away, to make a clean sweep.”***  Forgiveness is the equivalent of pulling the trash can over to the refrigerator and tossing out all that nasty stuff we’ve accumulated.  Some things just don’t improve with age!  Get rid of them!

“Be kind to one another, tender-hearted, forgiving each other, just as God in Christ also has forgiven you,” are the instructions given in the very next verse.   Forgiveness is a choice, and the only right response to what God has done for us in Christ.  When I finally chose to forgive, it was a simple (that doesn’t mean easy!) act of the will.  I didn’t “feel” any differently towards them.  But forgiveness cleared the way for some new things to sprout in my heart, like kindness and compassion.  When I saw this person a month or so later, I surprised myself (and probably them!) when I reached out spontaneously to hug them.  God had freed me from my hurt, bitterness, and anger!  There was now room in my heart for love.

So…what’s in your fridge?  Go ahead, open the door to your heart, and take an honest inventory.  Got some unidentified “dying” objects in there?  Some mystery meat?  God is giving you permission to throw them out.  Enlist others’ help (a trusted friend, your spiritual leader, a godly counselor) if you just can’t bring yourself to face them.  But determine today to forgive.  Let them go.  You won’t miss them!  God can then restock your empty shelves with fresh and wholesome things that only He can supply and that everyone can enjoy!

I…hate…him.  I sat up in bed, startled by the intensity of the thought.  The dislike I felt for this person had now morphed into something bigger, uglier.  I had been hurt, on more than one occasion, by his actions.  A conversation earlier that evening had caused the memory of those incidents to resurface.  I was well acquainted with Hurt, and quite familiar with its companions, Anger and Bitterness.  But this new, dark stranger named Hate lurking at the entrance to my heart frightened me.

How did I get here?  I wondered, alarmed.  Hoping to gain some insight by writing, I pulled a half sheet of paper from my Bible cover pocket.  I began retracing my steps, listing the offenses that had caused the hurt.  After an hour or so spent recalling and recording his sins, I slipped the page back into my Bible and turned off the bedside light.

The next evening, I heard a knock at my heart’s door.  This time it was Humility, gently suggesting I take a look at that “log in my own eye.”  I pushed past Pride as I reached for my Bible and the nearest piece of paper, and began compiling my own list:  My Sinful Reactions to Being Hurt.  I was surprised at how quickly the ink covered the page.  Words like:  Disrespect, Critical Spirit, and Self-Righteousness stared back at me.  It was also no surprise to see Anger and Bitterness putting in an appearance.  This wasn’t exactly a Top Ten list of Christian virtues.

Lord, please take it away, I silently pleaded as I surveyed My List.  It wasn’t pretty.  I wanted to be forgiven, to have the slate wiped clean, to rip up that piece of paper and throw it in the trash.

Up until that moment, I hadn’t paid much attention to the writing on the opposite side of the page.  As I turned it over, I saw that it was His List from the night before!  I had unknowingly grabbed the same piece of paper and written right on the back of it.  Examining the two lists, I was struck by how minor and trivial his offenses seemed in comparison to mine, like little “specks” beside my “log.”  Yet I was still reluctant to let them go.

Jesus’ words from Matthew 6:14 came to mind:  “For if you forgive other people when they sin against you, your heavenly Father will also forgive you.”  I had never fully understood that concept.  Wasn’t God’s forgiveness free, without any conditions or strings attached?  Couldn’t I get rid of my list, but keep his?  After all, I might need it for future reference.

Flipping that double-sided piece of paper back and forth in my hands, God pointed out my double standard.  It suddenly made perfect sense.  Just as it would be impossible to destroy the front of a page without obliterating the back, the two sides of forgiveness were also inseparable in His sight.  If I wanted my sins gone, his had to go too.

Grace and Mercy embraced me as I accepted God’s forgiveness and told Him I would also forgive my offender.  I held the paper, My List facing up, and began to tear it into little pieces, once again hardly noticing the writing on the other side.  I bid farewell to Anger, Bitterness, Hate and Company as they retreated on the squares of paper fluttering to the trash can below.  Then I made my way to bed, devoid of lists, but full of Peace.