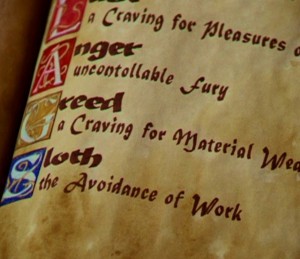 I…hate…him.  I sat up in bed, startled by the intensity of the thought.  The dislike I felt for this person had now morphed into something bigger, uglier.  I had been hurt, on more than one occasion, by his actions.  A conversation earlier that evening had caused the memory of those incidents to resurface.  I was well acquainted with Hurt, and quite familiar with its companions, Anger and Bitterness.  But this new, dark stranger named Hate lurking at the entrance to my heart frightened me.

How did I get here?  I wondered, alarmed.  Hoping to gain some insight by writing, I pulled a half sheet of paper from my Bible cover pocket.  I began retracing my steps, listing the offenses that had caused the hurt.  After an hour or so spent recalling and recording his sins, I slipped the page back into my Bible and turned off the bedside light.

The next evening, I heard a knock at my heart’s door.  This time it was Humility, gently suggesting I take a look at that “log in my own eye.”  I pushed past Pride as I reached for my Bible and the nearest piece of paper, and began compiling my own list:  My Sinful Reactions to Being Hurt.  I was surprised at how quickly the ink covered the page.  Words like:  Disrespect, Critical Spirit, and Self-Righteousness stared back at me.  It was also no surprise to see Anger and Bitterness putting in an appearance.  This wasn’t exactly a Top Ten list of Christian virtues.

Lord, please take it away, I silently pleaded as I surveyed My List.  It wasn’t pretty.  I wanted to be forgiven, to have the slate wiped clean, to rip up that piece of paper and throw it in the trash.

Up until that moment, I hadn’t paid much attention to the writing on the opposite side of the page.  As I turned it over, I saw that it was His List from the night before!  I had unknowingly grabbed the same piece of paper and written right on the back of it.  Examining the two lists, I was struck by how minor and trivial his offenses seemed in comparison to mine, like little “specks” beside my “log.”  Yet I was still reluctant to let them go.

Jesus’ words from Matthew 6:14 came to mind:  “For if you forgive other people when they sin against you, your heavenly Father will also forgive you.”  I had never fully understood that concept.  Wasn’t God’s forgiveness free, without any conditions or strings attached?  Couldn’t I get rid of my list, but keep his?  After all, I might need it for future reference.

Flipping that double-sided piece of paper back and forth in my hands, God pointed out my double standard.  It suddenly made perfect sense.  Just as it would be impossible to destroy the front of a page without obliterating the back, the two sides of forgiveness were also inseparable in His sight.  If I wanted my sins gone, his had to go too.

Grace and Mercy embraced me as I accepted God’s forgiveness and told Him I would also forgive my offender.  I held the paper, My List facing up, and began to tear it into little pieces, once again hardly noticing the writing on the other side.  I bid farewell to Anger, Bitterness, Hate and Company as they retreated on the squares of paper fluttering to the trash can below.  Then I made my way to bed, devoid of lists, but full of Peace.

3 thoughts on “The Lists”