As we eagerly pulled up to the new house on our Closing Day near the end of August, we didn’t expect to be greeted.  But there they were, lining the driveway and waving at us.  Only they weren’t members of the Neighborhood Welcoming Committee.

They seemed to have sprung up overnight, or at least sometime during the six weeks that had passed between our offer and the closing.  I didn’t recall a weed problem when we viewed the house.  But we sure had one now.  And there they were, taunting us, obscuring our view and robbing our joy.

As I spent the bulk of my Saturday stooped over, attacking these unwanted guests in our gravel driveway, I had plenty of time to contemplate the topic of Weeds. I also pondered how weeds can be spiritually symbolic of Sin.  (For this is what one does in order to avoid dwelling on how much one’s backside hurts while pulling said weeds.)  What follows are my thoughts…

1)  Weeds are part of life in a fallen world.

Weeds entered the world as a consequence of man’s sin, and they’ve been a tenacious opponent ever since:  “…the ground is cursed because of you.  All your life you will struggle to scratch a living from it.  It will grow thorns and thistles for you, though you will eat of its grains.” (Genesis 3:17b-18, NLT)  (We even have some nasty looking actual thistles on our property!)

Weeds interfere with growth and choke out life.  Ignoring or denying them will only make the problem worse.  So it is with the “sin which so easily entangles us” (from Hebrews 12:1, NAS)  We must acknowledge sin’s existence and impact on our lives:   “If we say that we have no sin, we are deceiving ourselves and the truth is not in us.” (1 John 1:8, NAS)

2)  All weeds are not created equal.

During my extensive field research, I discovered that there are two distinct types of weeds:  1) The kind that come up easily from the ground with a firm tug, and 2) The kind that prefer to engage you in a vigorous game of tug-of-war.  Here is a picture of Chris with the latter variety.  (He dubbed this one “The Mother Ship.”) 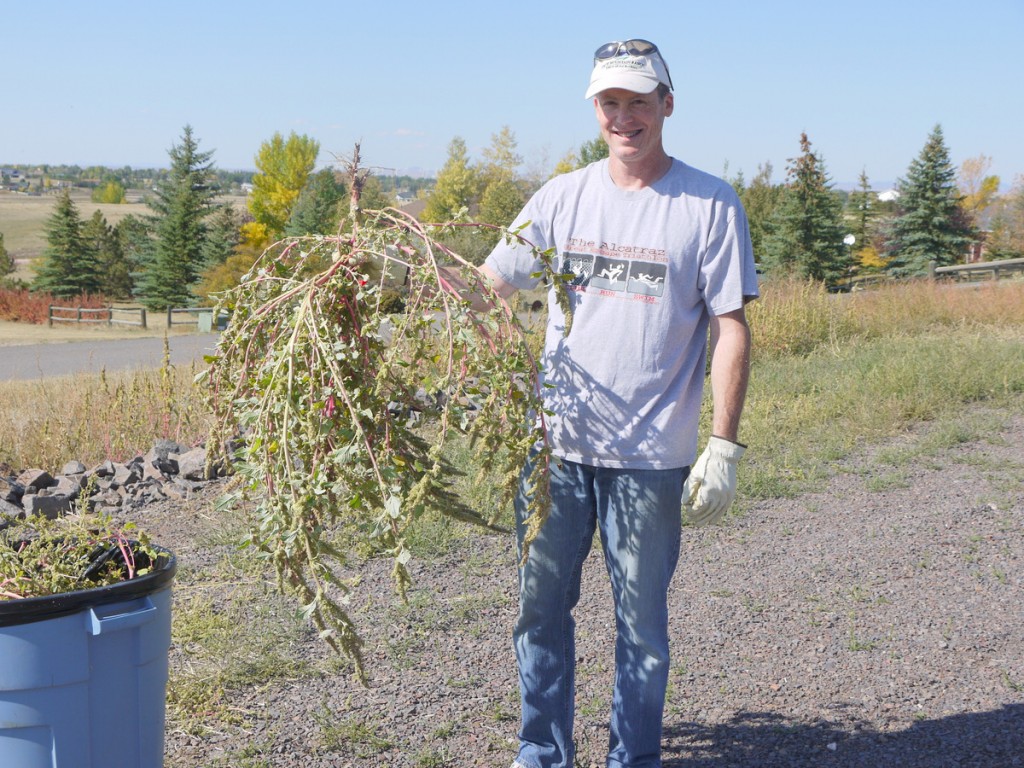 (Note all of the weeds in the background!)

Now sin is sin.  But some sins are easier to confess and forsake.  Others (persistent areas of defeat, spiritual “strongholds,” addictions) are more stubborn.  I struggle with one such area.  (I won’t go into detail here, but let’s just say that a recent examination of my closet revealed no less than five different sizes of jeans, all of which fit me at various times in the last two and a half years.  Yep.)

3)  Weeds must be pulled up by the roots.

The only way I can explain the sudden appearance of the weeds along our driveway is that the previous owner must have kept them mowed down while the house was on the market.  They were close to the ground and hidden from all but the most astute potential home buyers.  (Apparently we were not of this variety.)  While “weed-whacking” appears to alleviate the problem, it does not solve it.  The roots remain.

We can confess and suppress sin in our lives, but if we fail to deal with the root of our sin issues, they will eventually reappear.  Hebrews 12:15 describes a “root of bitterness” that can keep springing up, causing trouble.  I don’t know about you, but I get tired of pulling up familiar “weeds” over and over.  (I mean, how many times am I going to lose the same 10 or 20 lbs?)  I am asking God to show me the “root” of my struggles, so I can truly be free.  I highly recommend Lysa Terkeurst’s book Made to Crave, which has been helping me with this.

4)  Weeds can be prevented.

In my husband’s quest to conquer the weeds he came across an environmentally (and water supply) friendly recipe on the Internet, consisting of vinegar, salt and dish-washing liquid.  Apparently weeds dislike this particular combination.  Even though the view from our house is now mostly weed-free, we must be pro-active if we want to keep the weeds at bay.

If God had a recipe for living a life free from sin’s entanglement, I wonder if it might include some of the following ingredients:  the Word (Psalm 119:9), the encouragement of other believers (Hebrews 3:13), and prayer (Matthew 26:41).  Being pro-active in our faith means creating an environment that is sin-resistant and conducive to the kind of growth we desire.

5)  One day weeds will be eradicated.

As long as we live on this sin-cursed soil, our war with the weeds–both in the physical and the spiritual realm–will continue.  But we can experience victory.  Jesus overcame the power of sin on the cross.  One day He will remove the presence of sin altogether!

And on that final Closing Day, there will be a Welcoming Committee.  The house He’s preparing for us will be in perfect, move-in condition.  And I have a hunch the view will be amazing!