I first met Diane when she joined our weekly “Moms in Touch” prayer group.  She and her family had recently moved to the prairies of Wyoming from the beaches of Georgia, where she had belonged to a similar group.  She knew the value of consistent, focused times of prayer for her children and quickly sought out a group to pray with here.

It’s funny how you can feel like you’ve known someone for awhile even though you’ve just met.  Fellowship in the Lord is like that.  Mothering children of similar ages and stages also creates an instant connection.  But opening up your heart and soul in prayer develops an understanding and an intimacy that goes even deeper.

I’m thankful for the time I had with Diane, for she and her family moved back to Georgia within a year, preferring the humid coast to the arid high plains. (And who could blame them?)  Wyoming was not their home.  It was almost as if they were just passing through, never meant to stay here permanently.

Today I received a call telling me that Diane had been diagnosed with cancer this past fall, and had passed away last month.  I hadn’t picked up on the one or two subtle references to health issues and difficulties on her Facebook page during that time.  But then, Diane wasn’t one to draw attention to herself.  Her focus, during the brief time I knew her, was always on others, especially her three kids.

I bet she prefers the crystal seas of heaven to the barren, in comparison, landscape of this earth.  (And who could blame her?)  This world was not her home.  She was just passing through.  She was never meant to stay here permanently.

“But our citizenship is in heaven. And we eagerly await a Savior from there, the Lord Jesus Christ…” (Philippians 3:20)

And now I’ve got another friend waiting for me there. 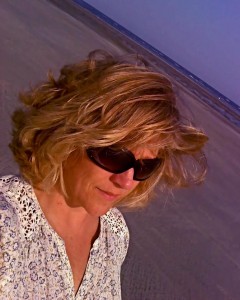 Beautiful Diane, on her GA beach

2 thoughts on “Just Passing Through”