I didn’t plan to have an encounter with God the other night.

As if one could plan that kind of thing anyway. I doubt Moses’ To-do list on The Day of the Burning Bush read:

God-encounters can’t be predicted. Neither can they be denied.

Wyoming thunderstorms are also difficult to predict. This one rolled through town unannounced, accompanied by torrential rain and quarter-size hail. My husband Chris and I scrambled to cover our flowers before the worst of the hail hit, getting thoroughly soaked in the process. Then we safely enjoyed the rest of the show through rain-streaked windows. (Except for the dog, who hid shamelessly in the basement.)

The storm eventually passed, as storms eventually do. I decided there was still time to squeeze in my daily walk, despite the unexpected weather delay. So I laced up my tennies, donned a warmer shirt, and headed down our hail-lined gravel driveway. My eyes focused only on my feet, as I tried to avoid stepping in muddy rivulets or slipping on icy marbles. After successfully navigating a path to the paved street below, I planned to turn right, but felt prompted to look left.

Above me hung the most amazing cloud formation I have ever seen! A massive macaron, suspended in the eastern sky, spotlighted by beams of setting sun. It was breathtakingly beautiful. The glory of God perched right at the end of my driveway.

I stood there in stunned silence. Chin raised, jaw dropped. I suddenly felt very small. Yet, at the same time, blessed to behold such magnificence.

What does one do in the presence of Glory? Shake off one’s shoes, like Moses? Fall on one’s face, like Isaiah?

I pulled out my iPhone.

Not very spiritual, I know, but very “on brand” for me. I always keep my camera close, ready to capture the moment. But my amateur panoramic shot just couldn’t do this momentous moment justice.

I lingered beneath that cloud, feeling almost as if I was peering through a portal into Heaven itself. If a flash mob of angels had appeared and broken out into the Hallelujah Chorus, I wouldn’t have been the least bit surprised. All too soon, however, the brilliance dimmed, and the enormous cloud disappeared into the twilight. I turned westward, resuming my walk and pondering what I had just experienced.

Back home, I eagerly showed the photo to my hubby. He thought it looked more like an alien invasion than an angelic visitation. (Apparently, aliens like to hide their spaceships in these types of clouds. Apparently, Chris likes to read too many sci-fi novels.) We’re still here. So I’ll assume he was mistaken, at least about this particular cloud.

As for me, I’m still processing my Close Encounter of the God Kind. Glimpses of glory require reflection. (Alien invasions probably do too.)

Here’s what I’ve got so far:

“Then they will see the Son of Man coming in a cloud with power and great glory.” (Luke 21:27, NKJV, italics mine)

Did you catch that cloud reference? (I’ve got chills.) I can’t help but wonder if the sky on The Day of His Return will look something like it did the other night. Actually, I bet it will be So. Much. More. Glorious. One thing is certain: it will be impossible to miss!

On that Day, the Bible states that “…every knee will bow…and every tongue will confess that Jesus Christ is Lord, to the glory of God the Father.” (Philippians 2:10-11, NASB) There won’t be time to upload a pic. You’ll be down on your knees, singing His praise.

Until then, let’s keep our chins up. Literally.

Lift your eyes to the heavens.

Watch the clouds for His return.

He’s coming soon, and the whole earth will be full of His Glory.

I really didn’t want to hear it. But she needed to say it. So I pressed the phone to my ear and listened as she shared her difficult story.

She had recently gone through an abortion. There were complications. She was traumatized.

I grieved. This was not the outcome I had been hoping for. One life ended; another life damaged.

The next morning, I opened my Bible app and numbly went through the motions of that day’s devotion. I skimmed the supporting Bible verses. The last two verses broke through my fog.

You saw me before I was born.
Every day of my life was recorded in your book.
Every moment was laid out
before a single day had passed.
(Psalm 139:16, NLT)

I believe life begins at conception. Psalm 139 is a well-known passage that teaches this truth. I thought of the unborn baby who was gone too soon, and mentally estimated the number of his* days.

I calculated the number of days his miniature heart beat.

Such a brief existence.

But his life mattered.

He also knows she is injured and in need of support.

I continued to the second verse:

You intended to harm me, but God intended it all for good. He brought me to this position so I could save the lives of many people. (Genesis 50:20, NLT)

I had an overwhelming sense that the baby, now safe in the arms of His Maker, was speaking. It was as if he was explaining the purpose of his short time here on earth, and prophesying over his mother’s future testimony and destiny. It was a merciful message of Hope.

God will redeem this. The story is not over. Someday He will use it to save the lives of many others.

I believe this. I am claiming this for her. And for anyone else reading this who has been impacted by abortion.

Abortion is ugly. It silences one heart and wounds another. I’ve personally witnessed its destructive aftermath in the lives of friends and clients.

But I’ve also seen Jesus mercifully breathe life into its ashes and fashion something amazingly beautiful out of the pain.

He’s the only one who can.

It’s the reason He came. 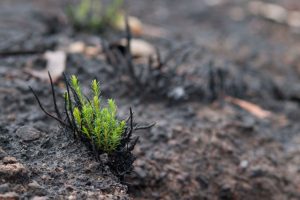 We are confident that God is able to orchestrate everything to work toward something good and beautiful when we love Him and accept His invitation to live according to His plan. (Romans 8:28, The Voice)

*While I don’t know if this baby was a boy or a girl, I decided to refer to him/her as “him.” I feel “it” dehumanizes unborn human life.

An important note: If you have experienced an abortion in your past, please know there is forgiveness and healing in Jesus. He can redeem your story too. I’m here to help, whenever you’re ready.