It’s time for a little confession.

My husband got me Godiva chocolates for Mother’s Day.

I know, I know.  It wasn’t pretty.  I told you this was a confession.  I admit the error of my ways.

But you see, I’m a Ghirardelli girl.  My husband knows this.  So when I pull a shiny package of foil-wrapped truffles beginning with the wrong letter ‘G’ out of the gift bag you can understand my confusion, right?

What was wrong was my reaction.

By focusing on the brand of chocolate in that bag I missed out on a beautiful truth:

I have a husband who brings me chocolate.

I have a husband.

At the end of Mother’s Day, or any day, aren’t those gifts more than enough?  The type of chocolate, the color of the flowers or the sentiment on the card doesn’t really matter.  It’s all too easy to miss the richness of our reality, the miracle of the moment, longing for what we think we lack.

I may not have it all.  What I have may not be perfect.

But I’ve heard it said that:

Happiness is wanting what you have.”

The truth is, I already have so much more than I could ever want.

Even the finest chocolates pale in comparison. 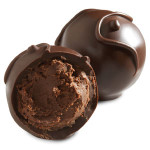 …giving thanks always and for everything to God the Father in the name of our Lord Jesus Christ… (Ephesians 5:20, ESV)

Their facial expressions were difficult to distinguish from our perch in the upper balcony during last Saturday’s matinee performance of “Wicked.”  But even from that distance there was no mistaking Elphaba’s green face and Glinda’s golden curls as they began their farewell duet on the stage below.  In perfect harmony their voices intertwined, lifted and filled the Gershwin Theatre on Broadway.

“For Good” is a song about friendship and the difference one life can make in another.  I couldn’t help but think of some of the people I had been blessed to know in my lifetime who had helped to change ME for the better.  My heart pulsed with gratitude and my eyes pooled with tears as I pictured their familiar, loved faces.

Three days later, as our flight from La Guardia touched down at DIA and taxied to the gate, I took my iPhone off of airplane mode to check for messages.  Waiting for me was a text from my dear friend Bridget, letting me know that a mutual friend of ours had passed away that day.  His name was Doug.

Doug was one of those people.

He had the build of a teddy bear and the heart of a servant.  His laugh was infectious.  He possessed the rare kind of wisdom obtained only through enduring trials and hardship.  He was Godly.

I was a young Arizona college girl majoring more in Sorority Life than in Spiritual Life when I met him.  But he believed in me, gently but persistently encouraging me to attend campus ministry events and conferences.  I showed up at one conference to discover my registration had been anonymously paid in full.  I always suspected it was him.

Doug had incredible faith.  Following graduation we both felt called into full-time ministry.  Inspired by the biblical story of Nehemiah, who rebuilt the wall surrounding Jerusalem in 52 days, Doug believed God would raise his financial support in just 52 days.  He did.  (Mine took seven months.  But Doug cheered me on and helped me persevere.)

We spent a summer ministering in Turkey together.  I would never have had the courage to go overseas without his strong leadership and secure companionship.  He carried my unwieldy hard-sided suitcase all over that country and stood quietly by while I suffered the unpleasant effects of food poisoning.  He later returned to the Middle East, where he faithfully served the Lord alongside his family for many years.

Heaven will be a more populated place because of him.

I have no doubt he is there now.  I can just imagine him waiting patiently at the pearly gates to welcome his countless friends and spiritual children as they arrive, one by one.  He’ll greet them with a twinkle in his eye and wrap them in a warm bear hug.  Then he’ll grab their suitcase and take the lead, showing them around his Father’s kingdom, just like he did on earth.

I’ve heard it said,
That people come into our lives
For a reason
Bringing something we must learn.
And we are led to those
Who help us most to grow if we let them.
And we help them in return.
Well, I don’t know if I believe that’s true
But I know I’m who I am today
Because I knew you.
Like a comet pulled from orbit
As it passes a sun,
Like a stream that meets a boulder
Halfway through the wood.
Who can say if I’ve been changed for the better
But because I knew you.
I have been changed for good.
It well may be
That we will never meet again
In this lifetime.
So, let me say before we part:
So much of me
Is made of what I learned from you.
You’ll be with me
Like a handprint on my heart.
And now whatever way our stories end
I know you’ll have rewritten mine
By being my friend.

Thank you, Doug.  You and God changed so many lives for good.  I am eternally grateful to be one of them.

*Excerpt from “For Good” by Stephen Schwartz

It’s all about the view.

It’s what made us fall in love with this house on the hill.  The view out back is pastoral, with rolling hills and valleys dotted with pine trees, houses and horses.  The view out front features spectacular sunsets over distant mountain peaks.  The house was even built to maximize the views, angled to the southwest, with long, tall windows and without interfering fences or trees.

Because, it’s all about the view.

As we settled into our new home, however, my gaze shifted to other things.  Little things like cracked bathroom tiles and stained carpet.  Bigger things like a cold basement and drafty windows.  And these things began to obstruct my view and cloud my perspective.  I grumbled and second-guessed our decision to purchase this house.  I even questioned God and His leading.

You see, it’s all about the view.

And I was in desperate need of a vision check.  My focus on what was wrong with this picture eclipsed all that was right.  My perspective needed to change.

The Lord brought this verse to mind:  “…in everything give thanks; for this is God’s will for you in Christ Jesus.”  (1 Thessalonians 5:18, NAS)

In response to His prompting, I decided that whenever I was tempted to dwell on a negative thought about the house, I would choose instead to thank Him…

Lord, thank you for this house.

Thank You that we could afford to buy a house.

Thank You for helping us with this move.

As I practiced a discipline of thankfulness and cultivated an attitude of gratitude, my viewpoint began to change.  God and His goodness filled the horizon and the brightness of His presence dispersed the shadows of negativity in my heart.

It really is all about the view.

And I can see clearly now. 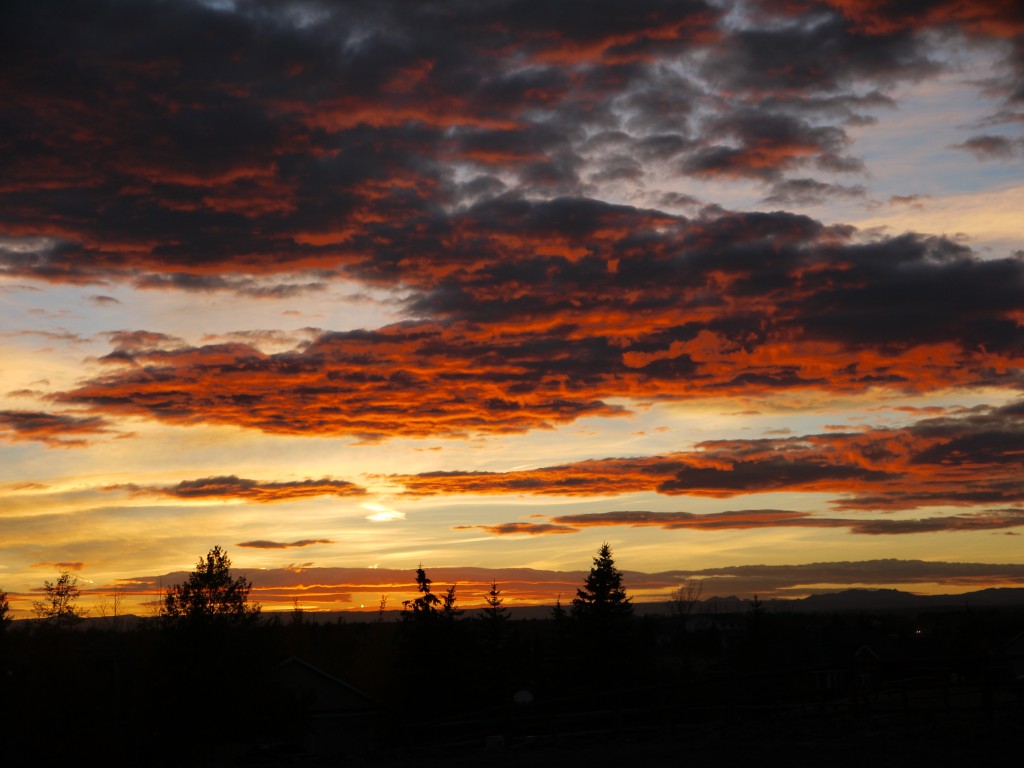 Exactly forty years ago this spring, my father was navigating a plane over the jungles of Vietnam.  I was eleven, the oldest of three children in our family, and the one old enough to understand the harsh realities of war.  That year marked the end of my childhood.

It was a very difficult season.  Not only were we separated from my dad, who was in a war zone, but my mom eventually suffered a breakdown from the stress and was hospitalized, leaving my brother, sister and me in the care of a neighbor.  Since it was near the end of his one-year tour of duty, my dad was summoned (safely, thankfully) home.  My mom recovered, and our family was whole once again.  It was a year we were glad to put behind us and rarely discussed.

A few years ago I mentioned to a Christian counselor how dark and bleak that time was, how it felt like God was nowhere to be found, and how I still sometimes struggled with those feelings and fears of abandonment.  He encouraged me to ask God a simple question:

So I posed the question to the Lord.  And got nothing in response.  Silence.  A blank screen.  The counselor suggested I wait.  God would answer the question in His time and in His way.

One Saturday afternoon while flipping through the television channels, I happened upon a PBS program about the Vietnam Veterans Memorial Wall.  I had heard of this Washington D.C. memorial honoring those who lost their lives in the Vietnam conflict, and was eager to learn more about it.  Seventy polished black granite panels comprise the wall, which stretches nearly 600 feet long and is ten feet high at its peak.  Each panel is engraved with the names of those who perished or went missing, in chronological order.  There are a sobering 58,272 names in all.

I watched the screen intently as visitors to The Wall scanned the seemingly endless columns for the name of a loved one.  Tears fell when they finally spotted the familiar name etched in shiny ebony.  Some traced the letters lovingly with their fingers.  Many stopped to place a piece of paper over the spot to make a rubbing as a memento.  Others left behind flowers to mark a sacred place on that silent wall.

The moving and thought-provoking program ended, and I proceeded to take a shower.  As I tipped my head back into the warmth of the water, God whispered these words to my soul:

I was watching over your dad while he was in Vietnam, so you wouldn’t have to make a trip to that wall someday.

His voice was inaudible, yet clear and unmistakable.  I was deeply touched by this tender expression of His love for me.  And I had my answer.  He hadn’t abandoned my family, even though it felt like He had.  Though I had no conscious awareness of His presence during those dark days, He was there, and at work, carrying out His sovereign plan.

In December of 2010, I had the opportunity to travel to Washington D.C. with my own almost eleven-year-old daughter and the Cheyenne All-City Children’s Chorus.  One of our stops was the Vietnam Memorial.  A guide directed me to the section of the wall representing the year my dad served.  Quiet tears of humble gratitude slipped down my face.  By the grace and mercy of God, I was not there on a pilgrimage in search of his name.

Yet as I walked the length of that somber memorial, tears of another kind of gratitude stung my eyes and obscured my vision.  Gratitude for those who did pay the ultimate price in service to their country.  Gratitude for the sorrow their loved ones endured on behalf of an often ungrateful nation.  And gratitude for a God who is greater than our grief and bigger than all of our unanswered questions.